You can’t visit Vietnam without spend time exploring a Vietnamese food. Traditional Vietnamese food are all about the balance of fresh ingredients, intense flavours, and ease of cooking and preparation. Each dish has a rich history and represents a regional specialty; there are also many dishes that change depending on where you order them. These recipes have been passed down through families and communities in the past generations, and are now daily staples. There are so many beautiful dishes to sample, but we have curated the seven most popular traditional Vietnamese food to sample on your adventures. 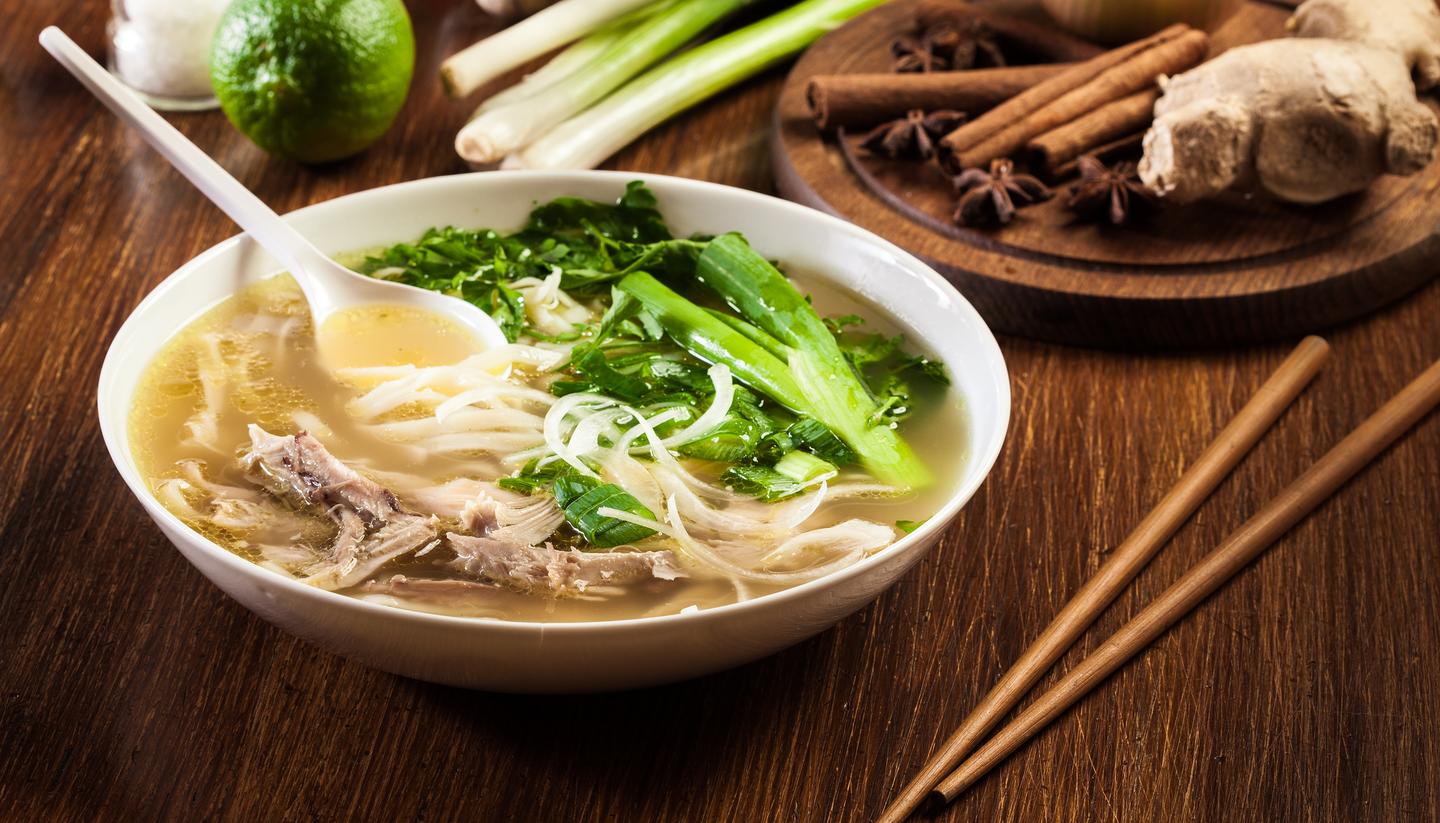 The origins of pho can be traced back to Northern Vietnam from hundreds of years ago. Legend has it that pho was created as a quick and easy sustenance for the army troops during the wars. The key element of any bowl of pho is the broth made of cloves, cinnamon, and star anise simmered with beef bone for days at a time. This may seem like extensive preparation, however it is thanks to the length of time creating the broth that it has such a sweet and complex flavor. When pho is served, you immerse layers of thin rice noodles and thinly sliced beef cooked medium rare in the hot broth and in the South of Vietnam you season the soup with fresh thai basil and mint ripped into the bowl. Northerners prefer their pho with no herbs or vegetables, and let the flavors of the broth guide the meal. You can find a bowl of pho anywhere in Vietnam as it is one of the most popular meals for breakfast or lunch, and if you go to a local street vendor it will only cost you $1 to $3 a bowl.

There is a famous pho restaurant in Ho Chi Minh City that all the locals know about. Unchanged over the past half a century, this pho restaurant is revered for its high quality beef, large portions, and fast service. Head on down to Pho Hoa Pasteur, 260C Pasteur Street, Q3, HCMC to sample for yourself the soup that has passed the test of time.

A favourite of millions, com tam is a simple delicacy developed during the French colonial period by the Vietnamese working class. The Southern workers discovered they could use the fractured rice grain as a delicious, dietary staple. Com tam, or broken rice, includes grilled pork chop, steamed egg, shredded pork, as well as cucumber, pickled vegetables, and fish sauce. This dish is typically served with a fork and spoon, as opposed to chopsticks, due to the French influence from where it originated. A Southern classic, com tam is notoriously hard to find in the center or north of Vietnam, but when you can find a vendor is will only cost you about $1.5 – 2 and make it one of the most affordable traditional Vietnamese food.

The address is 260 Vo Van Tan, District 3, Ho Chi Minh City and is reachable by a taxi in ten minutes from District 1.

Driving through the streets in Vietnam early in the morning, there is one dish you will see more than anything- the fantastically simple banh mi. This sandwich can also be traced back to the French colonial period, even through the roots of the name; banh is pronounced similarly to the French word for bread pain and literally translates into “bread made from wheat.”  Initially this dish was imported and only sold by expensive bakeries, however it began to spread to the masses when the Vietnamese working class discovered ways to change the ingredients and make it more accessible. Today the typical Vietnamese banh mi consists of mayonnaise, pate, sliced ham and pork, pickled vegetables, coriander, and hot sauce. The fusion of flavours between the Vietnamese fillings and French baguette makes this delicious meal a favourite of many.

Bun Bo Hue literally translates as beef noodle soup from Hue, a central city in Vietnam that was once the ancient capital and a main base of many Vietnamese flavours. The history of bun bo Hue is relatively unknown, but it is rumored that it was invented hundreds of years ago by people moving from Northern Vietnam to the South. The broth is the backbone of bun bo Hue, as is typical with many distinct Vietnamese soups like pho. To prepare the broth beef bones must be simmered for hours with lemongrass and seasoned with fermented shrimp sauce. It is this combination that creates the distinct taste of the dish, that is then served with rice vermicelli noodles, thin slices of beef shank, cha, a mix of mint, basil, coriander, and bean sprouts.

Bun cha became an international attention overnight after US President Barack Obama and celebrity chef Anthony Bourdain were pictured eating the dish together in Hanoi. Their choice of this dish is now surprise as bun cha originated from the Old Quarter in Hanoi and has been one of the city’s signature dishes for hundreds of years. What makes this dish special is the intense preparation involved in making it; minced pork must be marinated overnight to fully absorb the flavor of herbs and shaped into balls, keeping attention to make sure the meat is tender and juicy. The sauce is what makes the dish spectacular; a good sauce will give a balance between the sweetness of the meat and the saltiness of the fish sauce. The Hanoi traditional dish is served only at lunchtime and comes with rice vermicelli, fresh vegies and herbs such as basils, coriander.

This savory pancake originates from the Mekong Delta and is extremely popular in the Southern and Central regions of Vietnam. The dish gets its name as xeo is the sounds of the batter sizzling in the hot oil as it cooks to crispy perfection. Each region and city has its own variations on banh xeo, but the typical core is made from bean sprouts, sliced papaya, boiled pork and shrimp or chicken, and eaten in a wrap style with mustard leaf, lettuce, Thai basil, and mint. The sauce contains the perfect mixture of spice, fish sauce, and salt to balance the textures and flavours of the dish.

You truly have to use all five senses to enjoy banh xeo: listen to the sound of the crispy pancake when you take the first bite, observing and appreciating the stunning colours of the yellow flowers, orange sauce, and green herbs. Let your nose savour the intense smells, and your hands must caress the food as you roll it up, dip it in the sauce, and guide it to your mouth. Banh xeo is a group activity and represents the union of friends and family, it’s a shared experience instead of an individual experience and is used to celebrate holidays and special occasions. A legendary place to get banh xeo in Ho Chi Minh City, and also a favourite of Anthony Bourdain, is Banh Xeo 46A Dinh Cong Trang in District 1. This is a popular location for locals and tourists, and should only set you back $4 per person for banh xeo. The restaurant also specializes in other specialties from the Mekong Delta such as spring rolls, stir fried beef noodles, and chicken salad. Cao Lau is less well known when it comes to traditional Vietnamese food. This ancient Hoi An dish appears no different to other kinds of noodle on the surface, however there are some differences that stand out once you know what to look for. It is reasonable to say the cao lau noodle is a combination of the three distinct cultures present in Hoi An: Japanese, Chinese, and Vietnamese. The noodles are thick and yellow, similar to udon noodles, and the barbecued pork, char sew, however there is not as much broth as you would expect in a quang noodle.

Similar to quang noodle, you can taste cao lau with a little or without broth, however you cannot call a dish cao lau without the BBQ pork, cut from the pig’s thigh for the best, firm cut, to produce the sweet broth. The pork is marinated in 5-flavour spice to create the unique flavours that tantilise the eater. Cao lau is best eaten with bean sprouts, fresh herbs, peanuts, and bbq pork sauce on top, with chili sauce, lemon, and fish sauce added to taste. Cao Lau can be found in almost restaurants in Hoi An yet Trung Bac restaurant, 87 Tran Phu, is the place you should visit. The restaurant is a piece of cultural heritage itself as it’s an ancient house that has existed over 100 years. A bowl of cao lau here costs you $.1.5, but there is no chance you will leave having eaten only one bowl.

Bun dau mam tom is a rural food of Northern Vietnam. Rice vermicelli is served with fried tofu, pork, chả cốm and shrimp paste. Chả cốm is a kind of vietnamese sausage, a mix of pork and young rice that is fried. It is cripsy and a bit greasy, it decides how delicious a Bun dau mam tom tray is. Bun dau mam tom is a must-try dish for what to eat in Hanoi. Vietnamese dishes attach special importance to balance of ingredient. Bun dau mam tom, with a large amount protein, would be served with numerous kind of raw vegetable including but not limited to perilla, Vietnamese balm, Thai basil, escarole, stinkvine and fish herb.

In Ho Chi Minh City, you can find some Bun dau mam tom restaurants of Hanoian emigrants; for example, Ha Noi restaurant on Ngo Tat To street, Rau Kinh Gioi restaurant on Pham Hong Thai street and so on.

Bun/com hen are well-known traditional dishes of Hue, Vietnam’s ancient capital. Eaters can choose white vermicelli, rice or congee to eat and order a bowl of baby clam soup to have with it. The fresh baby clam is picked up at Perfume River, soaked in rice water so the clams will get rid of mud and sand then boiled until they open their shells. The boiled water will be added some spices to be served and called baby clam soup.

The dishes are served with rice, congee or vermicelli, raw vegetables and various ingredients such as cooked peanut, mango, sesame, fried pork skin, and shrimp paste. 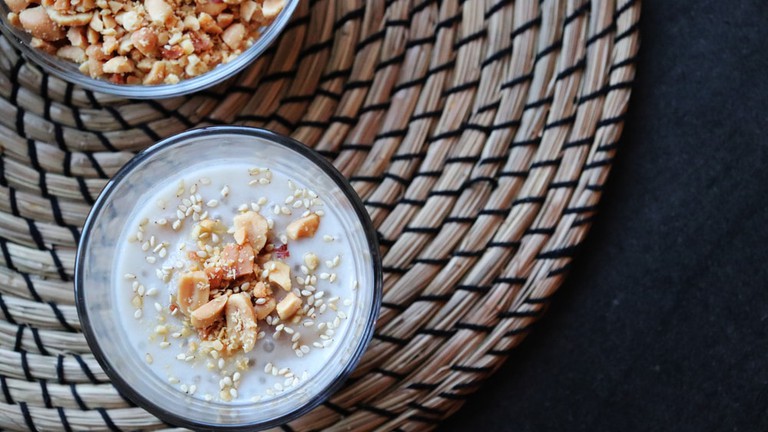 Che is a traditional sweet dessert of the Vietnamese with various recipes using different ingredients. We can categorize Che into 6 types due to their ingredients.